Elizabeth Anyaegbuna, co-founder of Sixteenbynine and Bloom in Colour – Tips from the Top to Succeed in Media Sales (Sept 20) 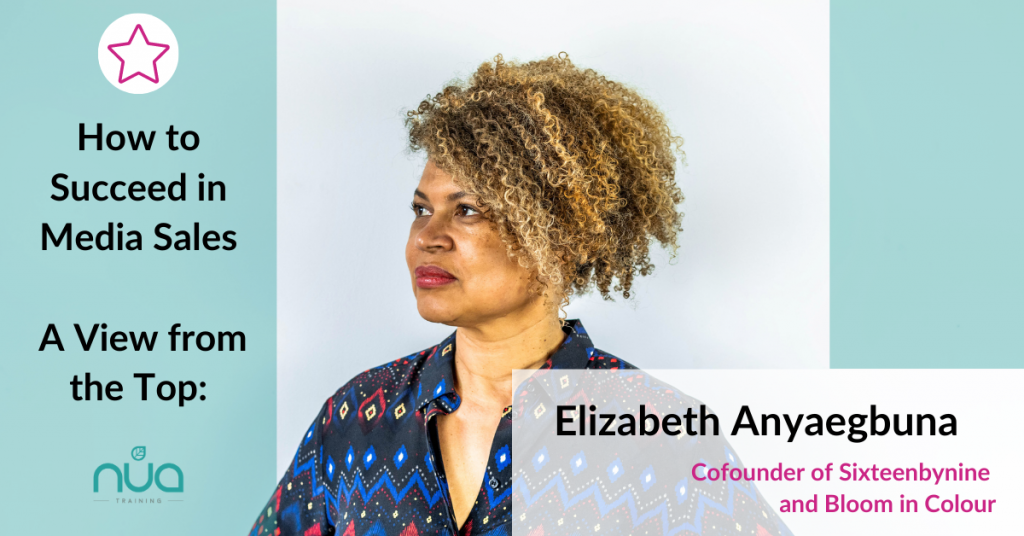 What has been your career path?

As many people do, I basically fell into advertising, though I always knew I wanted to work in Media.

I had a friend who worked at Sky and she told me about a job on the traffic side. Crazily enough I didn’t even know what it meant when I started, but I got the job and needless to say I lasted for 9 months.

I was approached about moving into the Sales side, basically because I talked a lot to people, and by then I knew the way the systems, operations and ads worked.

So I gradually worked my way up on the Sales side at Sky, then moved across to the Viacom business, working on Nickelodeon, ultimately becoming Partnership Director at Viacom.

My entrepreneurial drive has always been there. So when I was approached about an opportunity to set up an Ad Sales division for an African Broadcaster that had acquired the English Premiership football rights, I decided to go for it.

I needed to set this business up from scratch and this is where all of the knowledge I’d built up in my career became invaluable. It was an amazing hectic experience and I loved it, but the financial crash meant some of the investors pulled out, so I had to return to the UK and back to the corporate media world.

I’d arrived at a point in my career where I was comfortable in my roles, so wanted to make myself feel uncomfortable again and challenged. So we set up Sixteenbynine – a TV and video centred media planning, buying and production agency, which brings us up to today.

What’s been your biggest setback?

The African experience closing down was probably the biggest setback. I’ve always had a real interest in the developing world and it was amazing to see how we were having a really positive effect on the local community. As well as the premiership, we’d broadcast local football games, people would go to bars to watch them, they’d buy drinks, we’d get sponsorship for the shirts, all of it putting money back into the community.

Then, with the financial crash it all came to an end, even though our division was doing well. That set me back a few years.

What has been the best piece of advice you’ve been given?

Listen. Silence is so powerful, particularly in negotiation. Use your ears and listen to what’s really being said and keep your eyes on the end goal.

What do you think it takes to be a successful media sales/business leader?

Again I come back to listening. People often talk a lot but don’t really hear what’s being said. I think there’s real power in being that quietly confident person, measured in your response, who commands an audience by not saying too much.

You do need to catch people’s attention though, but when you do, you keep the attention and people trust you. Once you have that trust it builds the long term relationships.

What top tips would you give budding media sales stars?

Do try more than one thing to get a broad experience base. That may even mean taking a sideways step to then go up. I made a conscious effort to make sure I had a 360 degree set of experience in my career, covering TV, Digital and ultimately Partnerships, so I had all sides covered.

I do think having more than one string to your bow is really valuable. Try some things out to get to where you need to, and definitely take some risks along the way. Every experience is part of your learning.